Our members enjoy a challenging, fun golf course. The greens are among the finest in Central New York and our five sets of tees will test players of all abilities. There is also a putting green, driving range and practice area to sharpen your game.

Beaver Meadows has several membership categories; family and single golf with price breaks given for juniors and seniors. In addition, we have pool and social memberships that include a few rounds of golf as well as two levels of corporate memberships. Come see why we think Beaver Meadows is the best kept secret in Central New York.

Ash has been involved in the golf course industry for 20 years. Ash's golf course career started in Saranac Lake where he worked for Tony Barnes on the grounds crew. Ash has worked his way up from the grounds crew, irrigation specialist, Assistant Superintendent to Superintendent. Before becoming the Beaver Meadows Superintendent at the end of 2014, he previously held positions as Superintendent at Foxfire at Village Green Golf Course, Liverpool Golf & Public Country Club and the former Club at Caughdenoy Creek. He is a member of the Golf Course Superintendents Association of America (CGSAA) and currently serves as the President of the Central New York Chapter of GCSA. He has been very successful in creating outstanding course conditions for our members as well as engaging in and overseeing numerous course projects and renovations. Ash's vision, strong work ethic and hands on approach to management has led him to where he is today. Ash has been married to his wife Brandi for 20 years and resides in Syracuse with his wife and their dog Finley. When Ash is not at the golf course, he enjoys spending time with his family and friends, cheering on SU Basketball and hitting the slopes in Vermont or at Gore Mountain where he is an avid snowboarder.


Beaver Meadows has select dates available for outside tournaments to be held at the course. If you are interested in having a tournament at Beaver Meadows please contact our Tournament Director Brian Evans at bevans0222@gmail.com

Beautiful wooded trail between the 11th and 12th holes

View from the 16th tee box overlooking the 15th green

The stairs leading to the 17th green

17th green looking back at the tee box

We offer a fully staffed Pro Shop for our entire golfer's needs and wants. From the newest technology of golf clubs, balls and range finders to the newest clothing apparel with our custom Beaver logo. Our Pro Shop is here to help you with your game improvement and let you look good doing it.

We offer individual golf lessons from our professional staff as well as various teaching clinics throughout the summer and a junior golf program. For more information please contact the Pro Shop. 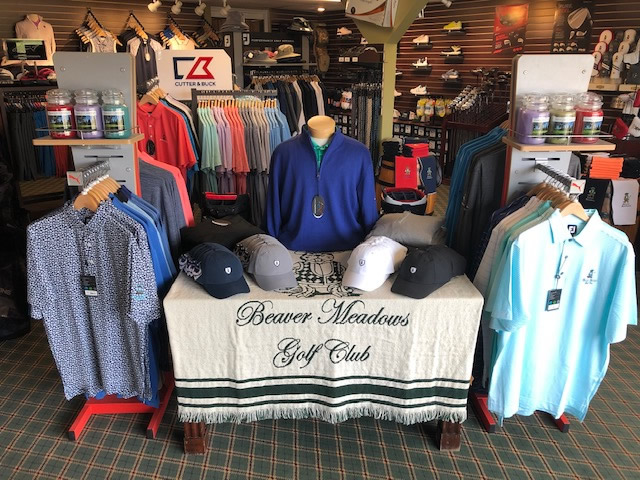 We have the latest from Titleist, Ping, Taylor Made, Greg Norman, Nike, Under Armour and Foot Joy. If we don't have it in stock, we can order it for you. In addition to clubs and apparel, we also offer custom fittings, club and grip repair, cart storage and special orders.

Kevin has been involved in the golf course industry for since 1999. Kevin's golf course career started working in the bag room at The Cavalry Club where he worked for his father, PGA Professional Bob McCarthy. Kevin has worked his way up from the grounds crew, caddy, outside services, Assistant Professional to Head Professional. Before becoming the Beaver Meadows Head Professional at the beginning of 2020, he worked as an Assistant Professional at The Cavalry Club, Monroe Golf Club Cazenovia Country Club, and Drumlins Golf Club. He is a member of the PGA of America. Kevin takes tremendous pride the presentation of tournaments and the Golf Shop to provide the ideal ambience exprected of a private membership. Kevin is a graduate of the Professional Golf Management (PGM) Program at Campbell University in Buies Creek, NC.

David has been in the golf business for over 33 years and a Class A member of the Professional Golfers Association for over 23 years. He got his start in Central New York at Foxfire Golf and Tennis in 1988. In 1991 he and his fiancee Kristin moved to Southern California where he worked at Colton Golf Club as an Assistant Professional. He then moved to Arrowhead Country Club in San Bernardino as an apprentice to one of the PGA's first Master Professionals Tim Miskell. David and Kristin relocated to Northern Virginia in the fall of 1994 where he held positions as an assistant professional at River Bend Golf & CC, as well as International CC. Following those positions, he became the Head Golf Professional at both The River Creek Club and Hidden Creek CC. It was at River Bend where he worked for one of the Middle Atlantic's Top Private Club Merchandisers, Roger Mack. In the spring of 2005, he returned home to Central New York to work at Lake Shore Yacht & CC, first as an assistant professional and then becoming the Head Golf Professional in 2014. David brings a wealth of experience in golf shop operations, merchandising, tournament management, teaching, and club repair. David resides in Cicero with his wife Kristin and their dog Bailey. When not at the golf course, David's other passion is fishing, especially fly fishing and fly tying.

Our onsite restaurant,Beaver Meadows Bar and Grill, offers members a variety of delicious menu options served by friendly, experienced staff. Dine in our comfortable dining room, take in a warm summer evening on the deck or relax in the grill room.

The newly renovated grill and tap room offers a fully stocked bar with a full dining menu situated in a comfortable setting. If light and casual is your choice, skip the dining room and enjoy the three televisions in the grill room.

Our snack bar is located next to the pro shop for golfers looking for food and drink to take on the course or grabbing something at the turn during their round. The menu is limited to quick and easy grilled food, chips, cookies, ice cream and both alcoholic and non alcoholic beverages.

Our large main deck offers comfortable seating off of the grill and dining rooms. Here you'll be able to take in views of the practice green and 10th hole while enjoying the weather. Food and beverage service from the grill room is available on the main deck.

The newly completed patio and back deck is located off of the dining room and overlooks the 18th finishing hole. The deck area will serve as a casual area with high top tables and the brick patio will have patio seating and a fire pit. Use this area for enjoying a beverage, the beautiful day/ evening or to watch players finishing their round.

The golf course and dining facilities are for club members. Outside events and banquets are available to non members based on availability and the approval of the club and restaurant. For clubhouse events please contact Chris Carpenter at 315-695-5187 extension 104 or at beavermeadowsbarandgrill@gmail.com.

Welcome to our Pool!

Group and individual swim lessons are available. The pool can be used for special events and private parties.

Pool/Swim membership - includes full access to the pool and the clubhouse including the Pro Shop, snack bar and the restaurant (proper attire requested).

Social membership - includes access to the clubhouse and 4-18 hole golf passes that can be used whenever the course is available, along with use of the driving range. This membership comes with a $60 per month minimum requirement in the restaurant from April thru October.

Pool & Social membership - includes all of the above but with 5-18 hole golf passes.

For those that want to cool off, sit by a pool with the amenities of a private golf club look no further. There are three different types of memberships that can accommodate you and your family. A lifeguard is on staff during the normal pool hours of 11:00 am to 7:00 pm every day of the week.

Kids will be able to be part of a team, make new friends,improve their swimming and promote good sportsmanship all while having fun in the pool.

In the early 1960's, the original concept for what became Beaver Meadows Golf and Recreation Association began with Ted Lebro of Phoenix, NY. Ted was a real estate broker with his office at Fulton, NY, and was interested in developing about 50 acres of land he owned on the west side of the Oswego River at the intersection of County Route 46, State Route 48 and the Pinnacle Hill Road.

Soon, the idea of a golf course in the Oswego County area of Phoenix became firmly planted in the minds of a small group of people headed by John Harder. This was during the time that the United States Government was subsidizing farmland which was taken out of production. [read more]

Please contact us with any questions you may have.